Under the Pressure Foot #18 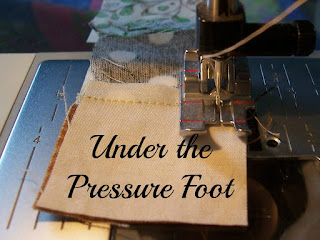 After spending a couple days of quilting and binding it is time to go back to piecing. I have two new quilts I am working on and I still have some on my 2015 list yet to be completed. It would be nice to complete a couple more off that list before the year is out. So I am going tackle a couple projects that are up to the border stage to see if I can complete them. One is my Vintage Sewing machine quilt (one of my new projects). 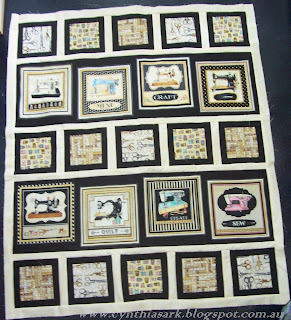 The other is last year's Grand Illusion mystery quilt. 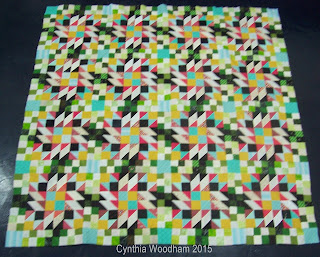 The first one only needs the second border cut and added but Grand Illusions needs its inner border plus it's pieced second border added. A little more work. I hope I have enough of the blocks for the second border.
The Vintage Sewing Machine quilt borders went on not a problem and it was brought up to the stage for quilting easily and quickly. 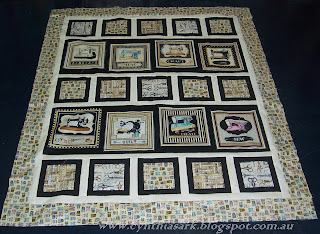 My Grand Illusion quilt is a harder task The inner border is supposed to be yellow but I have changed it to pink. So I managed to get it done and a lot more happier with it. 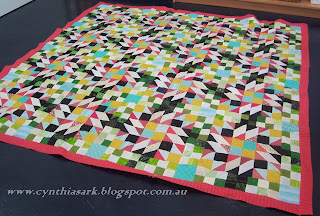 The second border has turned in a bigger problem. First I couldn't find the blocks. It took me a good hour to locate them. (Note to myself put things where they belong.) Then secondly there isn't enough blocks. I really don't want to make make any more. I just want it finished so I can move on.. So this is what I came up with and I will finish each border with a neutral piece on each end of the borders. 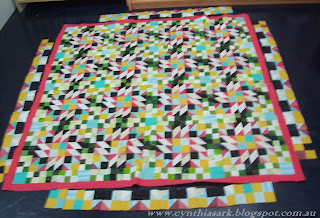