I have reached my final goal of 20 blocks, no more will be added as there is too much work on other projects that needs to be done. 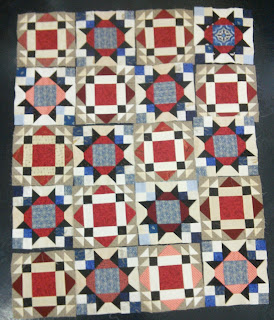 Now that was what I thought at the beginning of my day as I planned to sew my set in triangles blocks. Boy did I get it wrong. What happened I can't say, beside the fact I should be working on something else. I should know better, it is not the first time I have set blocks on point. So what could I do?
As far as I could see there was two options for me. First option is make a skinny quilt, which meant I had enough blocks but it just didn't look right. The second option is to make more blocks and really it was the only option I could live with. 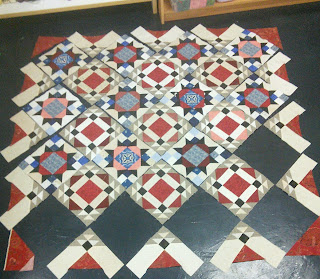 What got me was I had cut enough for the set in triangles for the larger layout without realising I had stuffed the amount of blocks I needed up. So it was meant to be this size. So now I need to make 5 more blocks to complete this layout. Then I will be able to sew the blocks into rows.
Until Next Time
Keep Stitching
Cynthia

Posted by Cynthia's Creating Ark at 3:00 AM