It is that time of the year where I look at what I didn't complete and compile a new list for 2018. This list is going to long considering what was left of the 2017 Project Round Up.
1. My Leaf Placemats Half of the first one completed. 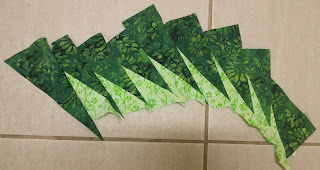 2. My black and white hexagon quilt. I am halfway through this one. Unfortunately I have not touched this one  during 2017 even though everything is cut so I should do something with it.

3. Forget Me Not Sew Along EPP hexagon quilt. Up to Step #9 which is about 3/4 through the top. A little bit of progress but not enough as I haven't finished it. I think I better start using this project as my English paper piecing demo to see if I can move it along. This year's Dresden plate demo project is ready for quilting so a replacement project is needed. 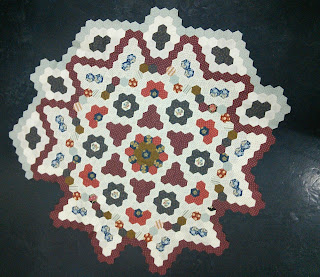 4. Allietare Mystery Quilt 2015. It is Bonnie Hunter's annual mystery quilt from 2015. This one I have picked up recently first to unsew a couple of rows so I could realign my blocks that I twisted. They were only twisted in the sense I used a directional fabric and I have to have them going the same way. The top is finally together and the backing made so it is ready for quilting. 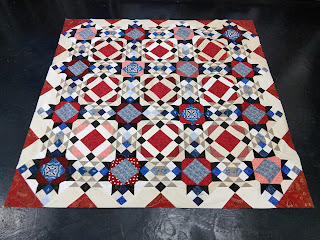 5. Vacation Time 2015 Block of the Month. Halfway through the blocks. No progress here. This one may become something else.

6. Bitty Blocks from Quiltmaker blog. I'm just over halfway through the blocks. I am considering making a small quilt with just what I have.  I have started on some four patch blocks which will become sashing rows in between the block rows of this row by row quilt. Plus some star blocks. 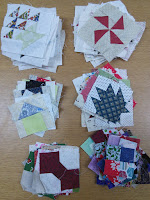 7. Paper piecing Quilt Along. I started this one hoping to improve my paper piecing I made 1 block and cut lots in preparation but couldn't find time to work on it. No progress here.

8. Craftsy 2015 Block of the Month I think I made 2 blocks. Kept meaning to cut the next blocks out but it never happened. Oh boy.  The projects from 2015 are haunting me as a write this post. This is the fifth one that I haven't finished from that year. No progress here, it will need to be reinvented as I give a friend some of the fabric from it, as she needed to finish a project. So we will see what I do.

9. My Pemberley Quilt. A block of the month started in 2016. Some progress but not enough so I will have to take a serious look at it. 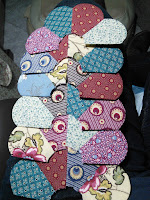 10. The Shop's Octagon quilt was another block of the month program started in 2016. The blocks are done and I have started on the squares that fill in around the octagons. I need to work on the layout so I can start sewing them together. Some of the blocks. 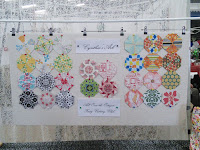 11. My Tea Party Quilt. The blocks are completed and the sashing strips are cut, so I just need to sew everything together but I haven't touched it. 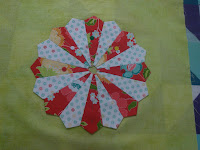 12. En Provence Mystery Quilt 2016- Mine is a smaller version of the original and I think there is still a few parts to make up before I can sew the top together. Even choosing to do a smaller version has not help me to complete it before the next year's mystery is released. 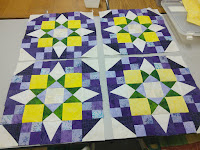 14. My Reel it in Quilt which I started at the beginning of 2017. I have completed half a dozen blocks.

15. My Christmas Reproduction Sampler Quilt. All the blocks are completed but no progress this year on it. 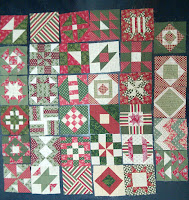 16. Pat Sloan's Solstice Challenge which was suppose to help me use up some on of my batick scrap/stash. I have only made three blocks. 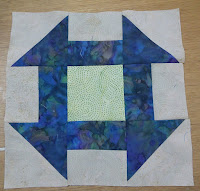 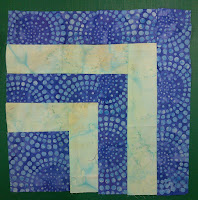 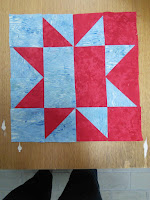 17. My Victorian Lace Table Runner the top is completed but I have misplaced it. I did notice a mistake it one of the blocks which is why I haven't quilted it. Not sure if to fix it or leave it. This is the last picture I have taken of it.

18. 2017 On Ringo Lake Mystery Quilt. Once again I am only making a quarter of the blocks until the quilt is revealed and them I will decide the final size. 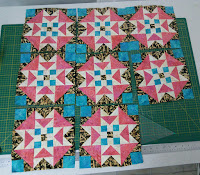 19. Round We Go is the current Block of the Month I am running in the shop. We are only 3 month in to it. Technically there is 48 blocks over 12 months. I have completed 9 blocks so far. 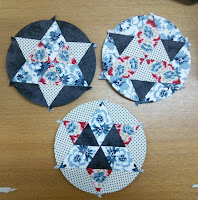 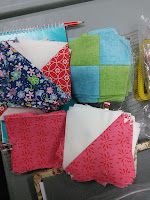 21. Plus there is another Four Patch project in the works which has developed from all the Four Patch blocks I have been making for my Bitty Block project. 22. My English paper piecing Dresden plate demo piece which has become a table runner. A different shape for next year's demo's -Hexagons is what I am thinking to help finish project #3 on this list.

23. My signature blocks from a swap I participated in last year. I need to do something with these blocks. I have a few ideas so we will see what happens to them. 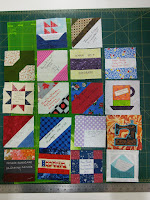 24. Gee Whiz! This is the last one. If I find any more I am not going to tell you.  My Framed Up Quilt which was a workshop is currently off to be quilted so only binding to do on it. 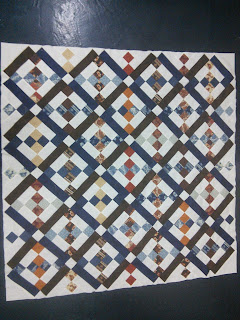 With all this down in writing I will need to focus on one or two projects  at a time and see them to completion.
Plus try not to add to this list, which will be the hardest part.
These are the projects I have started not the ones I have patterns for that I want to make or the ones that I have patterns and fabric waiting for me to start making.
Until Next time
Keep Stitching
Cynthia