I am taken the next step in my messy with the mind straight but not straight piecing adventure. After the Curve Shell experiment last month I got thinking what else could I do with this. Quilt is now finished. 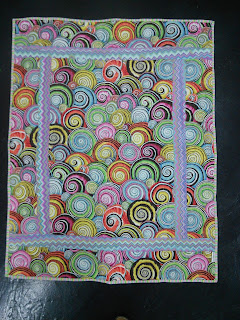 Could I do this with blocks? Would the effect work over a small distance? I had some scraps left over so I cut a couple squares from the shell fabrics and strips from zigzag strip off cuts.  Let's play with an easy block so a framed block was the block that came to mind to try after I considered some other blocks. My mind always runs off ahead of me. This is what happened. 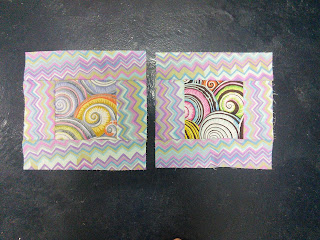 I did cut the strips and lay the block out before sewing to get some idea what the block looked liked and I want to keep the block balanced.

Of course once I started piecing the brain was working with the other ideas that were popping in, so I had to cut some  more Collective fabrics to try those ideas. The way I am going there maybe a series of quilts from these experiments. I have been so taken with these ideas I have give this experiment a name. From now on I will refer to it as  The Straight Curve Experiment. Who know where this may go. We will see where I end up. 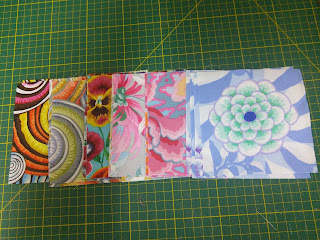 Posted by Cynthia's Creating Ark at 4:33 AM