I made up Funky Friends Factory Raff the Giraffe at the beginning of June using Tula Pink Eden range which has been a hit. I made him for a customer. So of course I then had to make a shop sample as I shared him on my social media accounts. This led to my goddaughter asking could I make her one, which I couldn't refuse. She pick out pink with white spots and a cute little stripe to go with it.
Plus I had a request for a grey and yellow one like my current shop sample.

So I spent an afternoon finishing off all three giraffes. The purple one was nearly finished but the other two were only cut out ready for sewing. 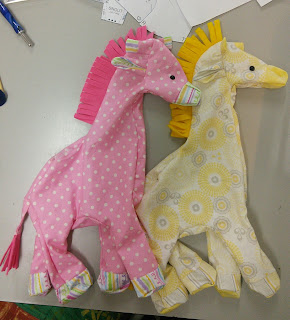 Followed by an evening of stuffing and chasing a cat who decided he was a lion who wanted to hunt flat giraffes. Denim wasn't quite impressed when I stood they around him, so much so he attacked the yellow and grey one. I wish I got a picture but it was over before I go the camera ready. 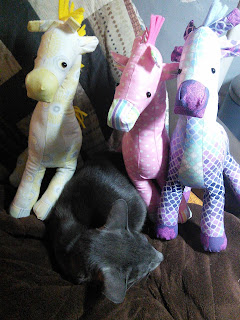 Diggles the Dragon is next for me to try and make a shop sample up.

Until Next Time
Keep Stitching
Cynthia
Posted by Cynthia's Creating Ark at 5:00 AM