Sew It Together Handmade - Lucky Sew Along #8

I had some sewing time which was determined by how much thread was on the bobbin. I was sewing until the bobbin thread ran out and with seams that are 16 1/2" in length it will come quickly.

I finished all my blocks and laid them out after I added the sashing strip to each one. A couple needed to be turned so I put them at the beginning of the rows as the blocks rows all need a sashing strip to start the row. 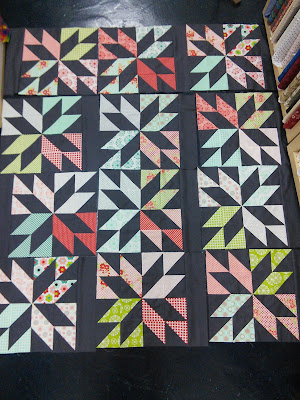 I cut the all sashing strips using my new Stripology ruler which I can see getting a lot of use in the future.
At least all the blocks have 1 sashing strip sewn to them and the first block row is together. The rest are now neatly pinned in their rows and I still have the sashing rows with cornerstones to do in the next sewing session which better come soon than later.

Until Next Time
Keep Stitching
Cynthia
Posted by Cynthia's Creating Ark at 11:34 AM