To Remove the Selvedge

I was piecing a couple of quilt backs on the weekend, which all quilters do. Nothing new there or surprising in that. I was ready to trim my selvedge off after joining a couple pieces of fabric together and I was struck with a thought. 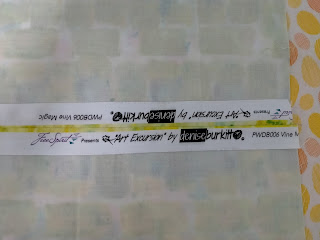 Should I leave the selvedge on?  I was taught to remove it as the weave is often different to the main fabric.  Though there has been times I have left it there, for what ever the reason was at the time I did. I do tend to use quality quilting fabric on the backs of my quilts,  so if I was using something of lesser quality I wouldn't leave the selvedge on.

Anyway. I was thinking along the lines- if my quilt survived a generation or two, it was well loved and started to wear out or ended up been sold or given away moving well away for me, By chance ended up in the hands of a quilter in the future would they be delighted to find out the fabrics details because I left the selvedges on the backing. In this case this quilt backing comes from the range I used in the quilt top. 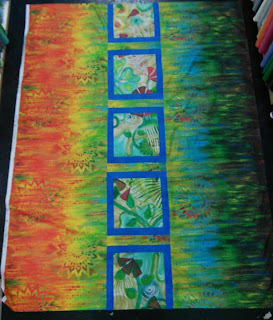 Even in my quilt top you can see my selvedge along the left side is still there. Though it will be trimmed off once I reach the binding stage. The other though I had if you have a fabric that tends to fray a bit too much leaving the selvedge on until the end would stop that from happening as much

Just like the quilts of the past where newspaper was used for foundations and left in for later generations to uncover when quilts finished and unfinished popped up.  An interesting thought isn't it. HAve you left the selvadge on or do you always remove it?

Posted by Cynthia's Creating Ark at 1:28 AM

What a history lesson that would be if you left the selvedge on for future generations.